A couple of weeks ago, I posted some goals to paint and take to SOO.

When those goal seemed achievable I added some stretch goals.

The Smurfs got done first.

I base coated them with Cygnar Blue Base. Then drybrushed on frostbite to lighten their backs,

arms and legs. Exile Blue was used for the dark spots. I mixed up a Blue ink wash. It was a little thin so I applied it twice.

The Bumblebees are different in the skin, the rest the details

Basecoat in Heartfire, drybrush with Cynus Yellow. Wash with a mix of red & yellow ink. Then Thamar Black on the “front”, his belly, legs and arms. The back of the arm, legs and torso are yellow patches with black spots

I used Gun Corp Brown to start the ropes, grenades and quivers. Then I thinned out Umbral Umber with flow improver and a little Mat Medium to bring out the details.

Hammerfall Khaki was the final step on the ropes.

The quivers got some Wurm green for the ropes. It needed some color. Feathers on the darts are Beaten Purple or Sanguine Highlights. I mixed in some MWH to add some high lights. The flames started

with Sulfuric Yellow and ended with Khador Red Base. Arrow heads are Greatcoat Gray with MWH for cords. The weapon is Battlefield Brown and the dart shaft is Gun Corp Brown. Bone Jack, a brown wash and some MWH on the bone weapons. Khador Red Base on the crab claws around their necks.

The Blind Walker is a concept piece. I had an idea based on the fluff. This guy would be bleached out from the frog toxin and the rest of the ritual. Bastion Gray base and lighted

almost to Morrow White on the skin. Claws, teeth and bones are Bone Jack ->MWH with some shading washes. Beaten Purple and Heartfire for the ropes. Blighted Gold & Brass Balls on the metal. The Fire goes from Sulfurous Yellow->Ordic Olive. The candles are the same colors as the ropes, just mixed them with MWH. Really proud of him, better than I hoped for.

Thrullg are really easy for me. Beaten Purple base. Wash with a thin blue ink wash. Brush with more purple and more purple with some MWH.  Claws, eyes and done..

The Wrastler was based in Battlefield Brown, brushed in

Thronewood Green. The add some Rucksack Tan. Rope are Hammerfall Khaki. Pig Iron on the metal. Some Bloodstone for rust.  Nothing exciting.

The Trogs had their skin done with the FoH Minion formula. I did a different color for the fins and rough skin on all of them.

Harpoons have a bunch of

metals and armor wash mixes on them. The leather cape also has some claws and hooks. Metal weapons started with Pig iron and Bootstrap Leather. There are a lot of ropes on them, Hammerfall Khaki and a wash did most of that.

Mist Speakers to some work. The kilt/skirt has a net of ropes with what I took to be stones attached. The weapon looks to be a stone axe. The handle looks like wood wrapped up and in between seems like bones and rope/vines. The left hand has a totem? On top is a fish? Below that are bones, ropes, beads, feathers. At the bottom is a bird claw holding a crystal? These details are interpretations. I hope they work. Bones here and there. The other one has a different stone & totem colors.

The Ironback Spitter was based on a painted turtle. Google painted turtle and you can find plenty of picture. Based in Cryx Bane Base. The legs, arms and

Three Croak Hunters…  After doing 2o Raider, this was pretty easy. One Blue, one bumblebee and one studio. Weapons are Greatcoat Gray, Bastion Gray and Wurm Green. Turtle shell is Ordic Olive.  Overall, pretty easy compared to some of this stuff.

The gobbers got left for last. Basing was the reason. The swamp bases for amphibious take two days to do 3-4 layers of water effects. The green swirls are from putting a think wash of cooler between the layers. Love these bases and the way the come out. Thanks Jeff, from D 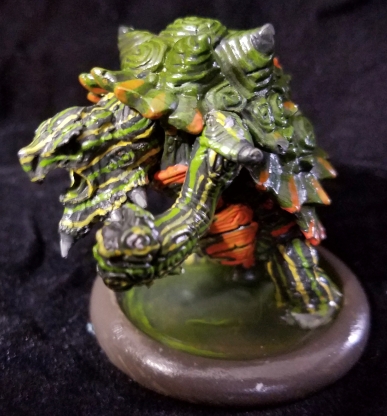 ragon Forge.In Mk2, I used to do complete theme lists. Most or all of the legal options. Blindwater looks like it will be my first Mk3 theme list finished to that level. I won’t bore you with what I have painted. I have already done that. Here is what can still add to this.

They are all coming to SOO and I hope to put them all on the table at one time or another.