Moving into summer..  Shorts, warm weather, how much do I miss that right now…  Below freezing right now.

I missed these two Pistol Wraiths in my last post, I painted them in Late Feb….

Last summer, I did a swap with a friend, he said send me a painted model…   It took months for him to decide on a model and paint scheme, then it took me a while to get the model and paint it.

He wanted Xerxis in a Black/Gold scheme.  All I have is a photo of when it was almost done.

With DreadFleet done, I had to find something else to do.  First thing was to finish a couple of small commission.  The last thing I had to do for that Khador one was to finish a Behemoth.  Someone offered me some models, I couldn’t afford them, but he took two painted solos in exchange.

While I was doing this, I was debating about what to do next for me…  Isn’t it all about me?  Well, actually very little of this stuff is for me..

In late June I made my choice.  Devil to Pay is rumored to be the worst theme list there is..  Guess what, I don’t censored!!!

I have talked about my BBoC (big box-o-Cryx).  I also have a SBoM (small box-o-Merc).  Pretty much the same story, someone was unloading some mercs, I gave him some new stuff.  I had some jacks and solos.  I got the casters, but couldn’t decide what to do first, what to paint, so they disappeared under my desk.  Then came Mk2.  I wrote an article on Lost Hemisphere about Fiona the Black.  I found the infantry horde and her spells really interesting.  Fast forward to early june of this year.  I was looking at my options and pulled out the Mercs.  I figured out what I needed and with the DreadFleet commission, I was able to order a Freebooter and the Sea Dogs/Press Gang I needed. 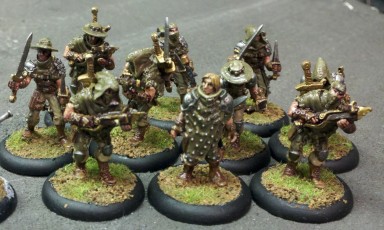 In mid just I pulled out Croe’s Cutthroats and did those while I was waiting for the majority of the infantry to show up.

After Croe’s I spent almost a month of just doing Mercs.  Next I did the solos, Kell, Doc and Ragman..  Kell is mostly dark with some shadows and edges on

the cloak in a different color ….. 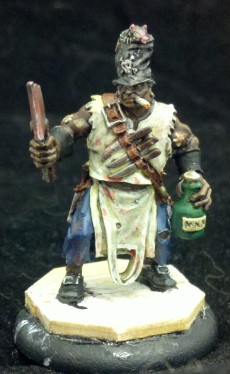 Doc was some fun, rat in his hat, bandages, roll your own, the jug and all…

Mr. Walls seemed like the one to do next.  All the 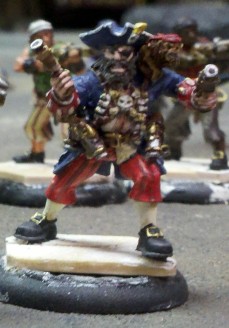 Ragman was supposed to be dark and ominous, but he came out kind of bright.

Fiona was a worry for me.  I wasn’t sure about her face, armor or that Tattoo under one eye.

Early July I took a quick break and did some Blitzers for a commission.  My first trolls, These are the old metal sculpts, so much personality.  The Pyg shooting the gun is having the time of his life… 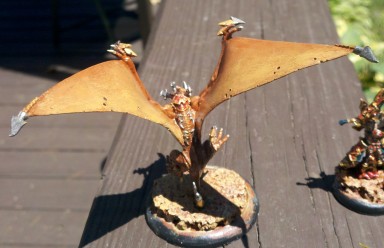 Late July, time for another BFF on LH…  I did Naaresh and his Archidon.  Naaresh has a ton of detail, looking at him now, I was a little sloppy and I might drop him in the dip jar and do him again…  The Archidon was a lot of fun for me.  I wanted to do different colors on the top/bottom of the body and wings..  I smile every time I bring him out.

After these, I pulled out the four Pirate jacks…   I didn’t do the Buccaneer, the right arm was broken and I couldn’t fix it.

Once I completed the Jack, time to jump on some infantry, nothing else left…   I did Ten Sea Dog and a rifleman

That was done the end of July.  I got my first Dark Eldar commission, Bright colored Dark Eldar, what ever the customer wants..   10 birdmen…. 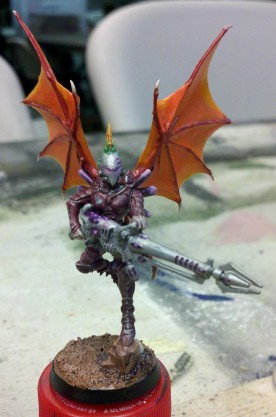 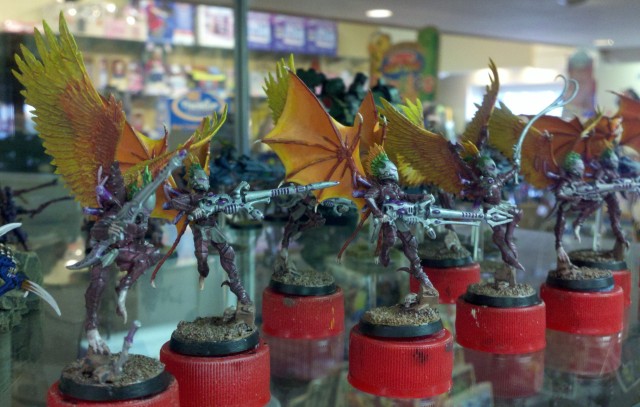 This is about the time, the rest of the Sea Dogs and the Press Gang showed up.  I had to make all the deck bases.  Each one has three individually cut pieces of wood and the corners cut off.  For this project I have done 46 30mm bases like that. 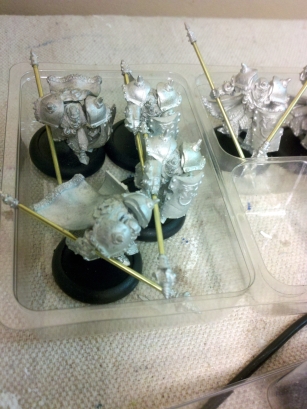 A second unit of Iron Fang Pikemen seemed easy after the first one.

Next I had a fun commission.  The board game, Decent has a lot of little plastic character models.  Don’t ask me questions about the game, I have never played it.  I spoke to the customer, he showed me some of the ones he had that he liked and some he didn’t.  I had a dozen to paint.  All very different. 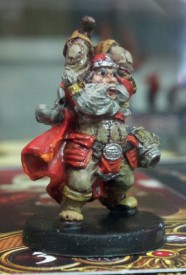 Archers, Barbarians, Thieves, Dwarves..  I used the cards for inspiration,

but put my own twist on them…  I will only show you a couple of the twelve.

That is a good place to stop.  Early September.