Battle Box Melee – you really should try this!!!

A couple of months ago there was a post in Lost Hemisphere that got my attention.  Link 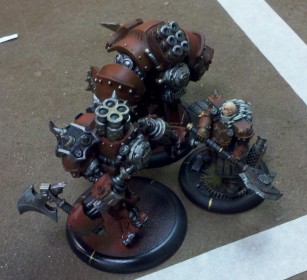 Spud has come up with a different twist on a Battle Box game.  Use any Official one or make an 11 point list.  There are some restrictions.  No character jacks and Chassis.  You can pick one group of Heavy Jacks/Beasts and one group of Light Jacks/Beasts.  Granted there are some casters that don’t work well without infantry, but some of them do…

First you can play it fast or take your time.  He recommends 5 min turns and a 30 + 2d6 min games with a three minute ext…

We did way over 50 games yesterday and never had a game go to time.  Less than five lasted a half hour.  There was plenty of time in a game to stop and think for a couple of minutes. 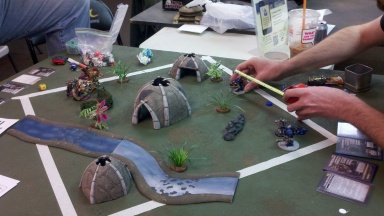 The tables are much smaller.  2′ x 2′ and you set up form corner to corner.  Corner to corner give about 33″ .  You need quite a bit of terrain.  Just make sure there is at least 3″ between pieces.  All I did was use masking tape to mark the edges of the tables.  One comment was “if you make one mistake, the game is over”.  I think this is like a knife fight in a closet.  In a little over five hours everyone played seven games.  We took a over a half hour lunch break. 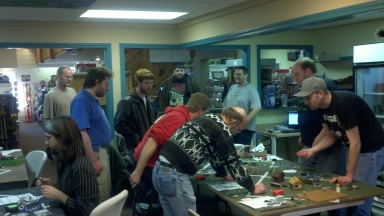 Spud also recommended Round Robin.  Most of us are used to Swiss for a tournament.  Run and event and play as many games as you can.  For who won, we used Wins, head to head, the scenario points.  We had two players who win five games, but the head to head game settle that.

Scenarios are steamroller like.  ?? well, what I should say is that Spud took steamroller scenarios and cut them down to fit on a 2′ x 2′ table.  Most the games ended in a caster kill, but we had a few scenario wins. 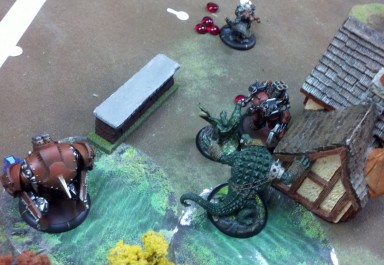 We had one player who had not played in a long long time.  It was a great refresher.  I think with will be the way we show new players how to play games after they have had a demo.

As Mr. Paul hinted on Tuesday, here’s the format we ran today:

The following is a list of chassis available for constructing your battlebox. Choose one chassis marked “H” and one marked “L”, and construct your army from the models listed under your choices.

Note that there are some odd inclusions in the Light category– Berserkers and Lesser Warbeasts count as Light choices, and Blindwater gets both the Boneswarm and Swamp Horror together as a Light.

If you’d like to run a similar event at your venue, you can find a modified signup sheet (to accommodate 8 rounds of play) and a PDF of SR2012 scenarios that have been modified to fit on a diagonal 2×2 board.

At our event, we put a handout of all eight scenarios on each table, and then randomly picked one of them every round until all had been chosen. It worked pretty well.

For the setup of each board’s terrain, I had two guidelines:

Beyond that, the terrain varied wildly from table to table, with some being densely-populated and others having only one or two major terrain features.

2 Responses to Battle Box Melee – you really should try this!!!